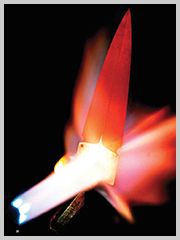 I began building the Atlas Mini Forge in 2010. After taking my own, crudely built forge to a Knifedogs hammer-in, the owner of Knifedogs told me that if I’d build them, he could sell them. There were a few design changes he suggested, but after about 4 months I had what I believed was a significantly better forge. Now, 5 years later, over 700 bladesmiths have one of my forges in their shops spanning 6 countries, 4 colleges, and 2 ABS Mastersmiths. Yeah, a couple guys who build the finest knives on earth for a living liked my forge so much that they bought one, despite already having a forge(or three). Today, both my sons Graham and Atlas help me build them.